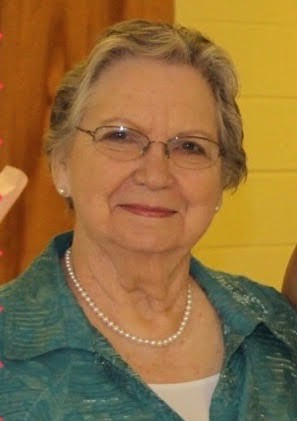 A celebration of Sue’s life will begin at 11:00am Thursday, December 13, at McGill Baptist Church with the Rev. Steve Ayers and Rev. Maurice Ritchie officiating. Burial will follow in Oakwood Cemetery, where the Ritchie family will receive friends.

A Cabarrus County native, Sue was born December 4, 1937, to Walter Lee Propst, a carpenter and musician, and Edna Edith Tucker Propst, a licensed practical nurse. She was predeceased by a brother, Charles Walter Propst, who died in 2014.

Sue graduated from Concord High School in 1956 and earned an associate’s degree from Lees-McRae College in Banner Elk in 1958. That same year, she married Robert Charles Ritchie on June 14, and they celebrated 60 years of a full life together earlier this year.

Her working life included early stints at Zack Roberts Camera Store and Lawson Bonds Photography, from which she received a scholarship to attend Lees-McRae. She became a certified medical assistant in 1976, and joined H&M Medical Clinic as a medical secretary and transcriptionist. She retired from the former Cabarrus Memorial Hospital (now Atrium Health) as a pathology transcriptionist in 2002.

Beyond her love of family and home, Sue loved horses, Westerns and Robert Redford. Always one to speak her mind and take action, it’s family lore that as a Lees-McRae student, Sue gathered a few fellow female students and petitioned the dean to allow coeds to trade their mandatory dresses and skirts for pants in winter on that chilly mountain campus. Their request was approved without issue, and the campus hasn’t been the same since.

Special thanks to Hospice and Palliative Care of Cabarrus County and Golden Heart Senior Care of Charlotte for their compassionate care.

To order memorial trees or send flowers to the family in memory of Judith Sugenia Propst "Sue" Ritchie, please visit our flower store.