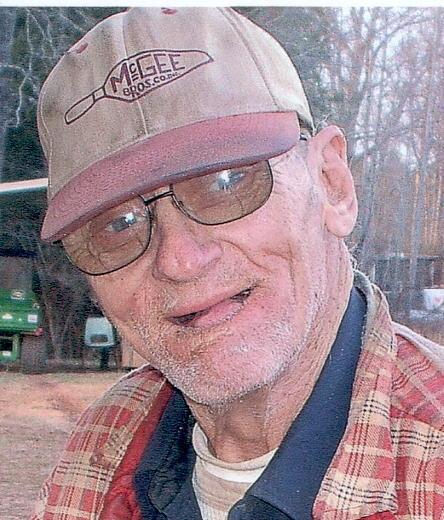 Ray Von Linker 77 quietly passed from this earth into the arms of Jesus after a long and courageous fight with C.O.P.D. on January 20, 2012. Funeral service will be 1:00pm Monday at Gordon Funeral Home officiated by Rev. Robert Howard and Rev. Faye McRorie, burial will follow at Center Grove United Methodist Church Cemetery. Ray was the third of nine children born to the late Aaron and Carrie Hatley Linker on August 13, 1934. Ray was mentally handi-capped due to complications of a high temperature as a baby. He never went to school or learned to read or write. Even without an education he was intelligent in so many ways. Ray was a country boy.He lived and worked on a farm his entire life, until he became ill, then he lived with his sister Linda Kay and her husband Junior Bittle. Ray liked to be outside and to walk; he would walk for miles without getting tired. It was not unusual to see him walking on the roads picking up cans. Then he started riding a bicycle equipped with a basket and a horn. He called it his Chevrolet. Many years later his knees and bicycle were worn out; he wanted something else to ride. His uncle told him about a vehicle called a Mule that he could drive on the farm. Mama got him that Mule. Ray was so happy, he loved his Mule. He would drive to the mail box or to the pond. That was his daily routine. He looked forward to seeing people when they came to fish. Several years later the Mule was worn out too. Then his mama got him a John Deere Gator. That was his pride and joy; to him it was like owning a real vehicle. Ray liked to take his nieces and nephews to the creek on his gator to play in the water. He would sit for hours on his Gator at the driveway to wave at everyone passing by. Ray will be missed by his family and close friends. Ray is preceded in death by a brother Kendall R. Linker and a nephew Warren K. Linker. He is survived by five sisters Ruth L. Barrier and her husband Bill of Mt. Pleasant, Polly L. Teal of Mt.Pleasant, Linda Kay Bittle and her husband of Mt. Pleasant, Frances L. Kanipe of Kannapolis, and Cathy Sue Tucker of China Grove and two brothers Gene Linker and Dennis Linker both of Mt. Pleasant. He is also survived numerous nieces and nephews. The family would to thank Hospice & Palliative Care of Cabarrus County especially his nurse Adrienne for taking such care great of him during his illness. In lieu of flowers the family request memorials be made to Hospice & Palliative Care of Cabarrus County, 5003 Hospice Lane
To order memorial trees or send flowers to the family in memory of Ray Von Linker, please visit our flower store.