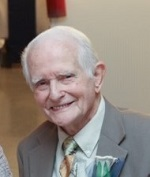 A celebration of Robert’s life will begin at 2pm Tuesday, November 19, at McGill Baptist Church with the Rev. Steve Ayers officiating. Burial will follow in Oakwood Cemetery, with military graveside rites provided by the Cabarrus County Honor Guard. The Ritchie family will receive friends from 1-2pm prior to the service.

Mr. Ritchie was born in Cabarrus County on March 14, 1931 to the late Archie VonCarl Ritchie, Sr. and Hazel Cook Ritchie. Mr. Ritchie served his country in the United States Navy, during the Korean Conflict, from 1951 through 1955. After his return home from service, he married Judith Sugenia Propst on June 14, 1958. They celebrated 60 years of marriage before her passing in December of 2018.

During his 28-year career at Snyder Packaging Company, he worked as a pressman and later retired as a pressroom foreman and manager. He was a health conscious man who completed a Charles Atlas bodybuilding course in his twenties and was a long distance runner for many years. He was also an active member of McGill Baptist church; and he enjoyed yardwork and the wildlife that lived there, often being able to feed deer in his backyard from his hand.

To order memorial trees or send flowers to the family in memory of Robert Charles Ritchie, please visit our flower store.